This is the official U.S. Immigration and Customs Enforcement qualification target (ICE QT target) That we have shrunken down to be easily printable.

Normally, these large, expensive targets cost about 50 cents a piece, often more. With an inkjet printer, these cost WELL under 10 cents to print, more like 5 or 6 cents. It simple makes sense to print these economic targets out yourself! Use this free ICE-QT bad guy printable silhouette target to challenge your friends, or see how your skills stack up on your own.

Also be sure to check out the other targets we have available on our site! Tons to choose from, and new targets every single week! Also, if you are interested in the full-sized commercial target, you can buy them here!

Click here to open and print this shooting target. 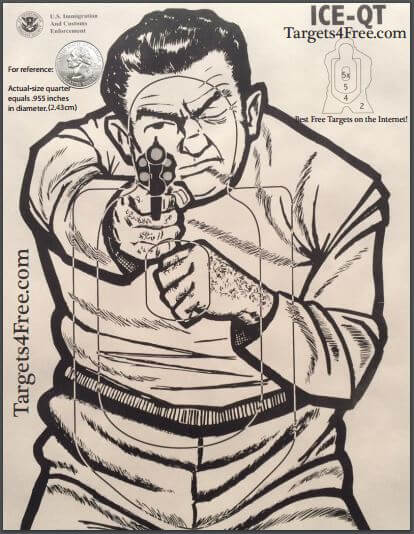 This is a shooting target of Youssef Zaghba, one of the three perpetrators of the London Bridge attack in June of 2017.  Take him down with this target.

The fact that Youssef Zaghba was able to carry out the London Bridge attack is perhaps an even bigger shame than the other two perpetrators. In an Italian airport, on his way to Istanbul, he was stopped. Authorities believed he was headed to Syria. He was caught with terror-related material on his phone, and even told authorities “I am going to be a terrorist.” Still, because he hadn’t actually committed a crime at the time, he was allowed to leave…

We at Targets4Free want you to enjoy this shooting target. But remember to be safe, and to always be vigilant out there. If you’d like to see our other terrorist shooting targets, click here.

Click here or the image below to open/print this target. 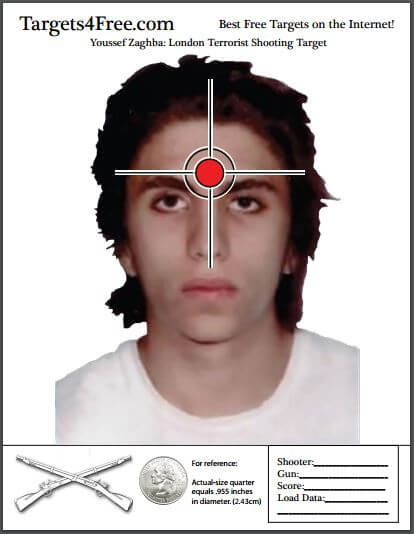 This is a shooting target of Rachid Redouane, one of the three perpetrators of the London Bridge attack in June of 2017.  Take him down with this target.

Rachid Redouane used a loophole in the UK immigration system to use his denied Irish ID to get back into England. It goes to show you that all countries need to be wary of who is let into their country, especially when they have traveled abroad to receive terrorist training. Enjoy this shooting target, but be safe and stay vigilant out there. To check out our other terrorist shooting targets, click here.

Click here or at the image below, to print this target.

This is a shooting target of Khuram Butt, one of the three perpetrators of the London Bridge attack in June of 2017.  Take him down with this target.

Khuram Butt was already known to authorities after having been in a documentary called “The Jihadis Next Door”. He was even reported shortly before the attack for a violent outburst in a mosque. It is important to keep an eye out for terrorist activity, no matter the source. Enjoy this shooting target, but remember to be safe, and to stay vigilant out there. For our other terrorist shooting targets, click here.

Click here, or the image below, to open the target for printing. 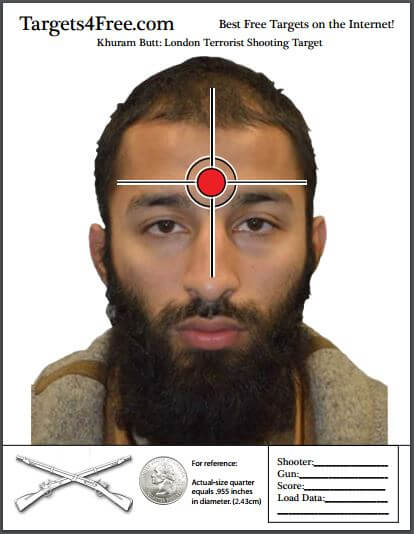